Tour Overview:
Enjoy a unique experience in the Andes with this circuit from Lima to Puno. Visit beautiful colonial cities and the archaeological legacy of the Incas and meet the descendants of the ancient settlers of Peru who keep their customs more entrenched. Discover the beauty of two of the great attractions of our country: the imposing citadel of Machu Picchu and the impressive Lake Titicaca.

Arrive at Lima Airport. Transportation service and a representative will pick you up from the airport at the scheduled time to transfer you to your hotel in Lima. The Peruvian capital is a modern metropolis full of history, currently undergoing an exciting process of cultural and economic changes.

Wake up to breakfast in the hotel before hitting the streets of Lima’s old town; a UNESCO-listed World Heritage Site packed with fascinating historical buildings. Start with the Larco Museum, located in the traditional Pueblo Libre district, which is housed in a beautifully restored viceregal mansion built on a pre-Columbian pyramid. The museum boasts the world’s most complete pre-Hispanic collection of gold and silver objects, as well as pieces of erotic art. Then visit Casa Aliaga, a colonial mansion granted in 1535 by chief conquistador Francisco Pizarro to Jeronimo de Aliaga, one of his captains. This is the only house from that time that to this day has always been owned by the same family. Continue to a scenic tour in the colonial downtown, which originates and spreads out from the Main Square. Here you can appreciate the grandiose architecture of the Spanish Empire and be amazed by Lima´s Cathedral. Erected in the 16th century, this building took more than 80 years to complete. After the tour, you’ll be transferred back to the hotel. (B)

You will be met by one of our representatives in Cusco who will transfer you to your hotel. In the afternoon, enjoy a guided tour of the former capital of the Inca Empire. The tour starts with a visit to Santo Domingo Convent, a large Renaissance-baroque complex, which was built over the Inca Coricancha temple. It was one of the most important temples dedicated to worshipping of the sun, and its foundations are still prominent at the base of the convent. Ancient chronicles say the temple was covered in gold leaf and filled with golden representations of nature. Then, visit the Cathedral, the most imposing monument of the Main Square. Head to the hills above Cusco to visit the remains of the fortress of Sacsayhuaman, whose impressive ramparts offer a stunning panoramic view of Cusco, and the ruins of the temple and amphitheatre of Qenqo, where it is believed the Incas practised agricultural rituals. Admire Qenqo and then finally visit PukaPukara (‘Red fortress’ in Quechua) an Inca military complex located on a prominent hill. Its dwellings squares, bathrooms, aqueducts, walls, and towers can still be appreciated. Afterwards, return to your hotel. (B)

During the morning, you are picked up from your hotel to visit the town of Chinchero, a traditional Cusco urban centre located at an elevated point with a beautiful view of the valley. The inhabitants of this area preserve the artisan traditions and the inherited knowledge of the Incas and display them in their clothes and customs. In Chinchero there are also archaeological remains and a beautiful seventeenth-century church, one of the first Catholic buildings in Peru. Then, you are transferred to the Living Museum of Yucay, an Andean traditions interpretation centre with demonstrations of the production of textile work, adobe, pottery and silverware, following the techniques used by the ancestors. In addition, residents of the museum include llamas, sheep and alpacas, and they can be fed! Upon arriving in Ollantaytambo, inhabited uninterruptedly since Inca times, have a superior Andean gastronomy experience in a restaurant and feel the true spirit of the Sacred Valley, transmitted in a cosy atmosphere! Later, climb the iconic fortress, built next to a mountain. At the end of this activity, you are transferred back to your hotel. (BL)

Transportation service will pick you up and transfer you to the Ollanta Station to board the train to AguasCalientes, the nearest town to Machu Picchu. Following a scenic journey through dramatic Andean landscapes, arrive at the station in AguasCalientes. Here you board a coach for a 25-minute ride to Machu Picchu. The ‘Lost City of the Incas’ is believed to have been built in the 1450s by Inca emperor Pachacuti as a holiday retreat, yet within a century the city would be abandoned following the Spanish conquest. The Spaniards never found it, so it was spared the destruction they brought on other Inca sites. Instead, it was slowly swallowed up by the jungle and hidden from harm. A guided tour explains the origins behind this awe-inspiring citadel, presenting its most prominent landmarks such as the monumental Main Square, the Royal Quarters, the Temple of the Three Windows, the Circular Towers, the Sacred Sun Dial, and the Burial Grounds. Return to AguasCalientes for lunch and enjoy the rest of the afternoon. (BL)

The delicious breakfast at the hotel is followed by a relaxing morning at leisure. We strongly recommend waking up early today to spend the morning over Machu Picchu and discover its secrets – it’s a must-have experience! The best views are from Huayna Picchu, which is about 360 metres above Machu Picchu with an underground temple complex; and from IntiPunku, which offers even better views from about 390 metres above the citadel. Another option is the Inca Bridge, a secret military trail, which controlled the access to the citadel. In the afternoon, transfer to the AguasCalientes station and take the train back to Ollanta station. From here you will be transferred to your hotel in Cusco. (B)

Enjoy a leisurely breakfast at the hotel then transfer to the bus station to start your journey through the impressive landscape of the Andes to Puno. Your first stop of the day is in Andahuaylillas, a town located around 40 kilometres away from Cusco. The main attraction here is the local Church, known as the “Sistine Chapel of America” owing to the high quality of art found inside. Continue the journey to Racchi, home to the Wiracocha Temple, a striking rectangular structure measuring 30 metres wide and 20 metres high. Lunch will be taken in the town of Sicuani before you head to La Raya, the highest point of the trip between Puno and Cusco, at the dizzying altitude of 4,313 metres above sea level. The next stop is the town of Pucara, the first urban settlement on Lake Titicaca, established between 100 and 300 A.D. Visit some of the monoliths from the town’s pre-Inca site at the Pucara Lithic Museum before completing the final part of the journey to Puno. Once in the city, a representative will check you in to your hotel. (BL)

After breakfast at the hotel, ascend to Lake Titicaca – the highest navigable lake in the world – where a boat will be waiting to take you to the beautiful Uros Islands. The Uros are an indigenous people of Peru that live on a series of human-made islands, created entirely from the buoyant totora reeds that grow abundantly in the shallows of the lake. The islands are composed of layers of woven totora, which are regularly replenished from the top as they rot from the bottom. The Uros people also use reeds to construct their homes, so cooking is done outdoors to avoid possible fires! After visiting this fascinating island, sail to Taquile, a small slice of heaven that once belonged to the Inca Empire. Look around and notice traces of its Incan past in the ruins that still exist around the island. After a brief introduction, the local community will give you an insight into their customs and traditions with a cultural demonstration. Lunch is enjoyed on the island before the return trip to Puno. (BL)

After finishing your breakfast at the hotel, your representative will assist you with check out and accompany you on the short transfer to Puno’s airport. (B)

*Extend your tour with a Paracas (Ballestas & Nasca Lines) 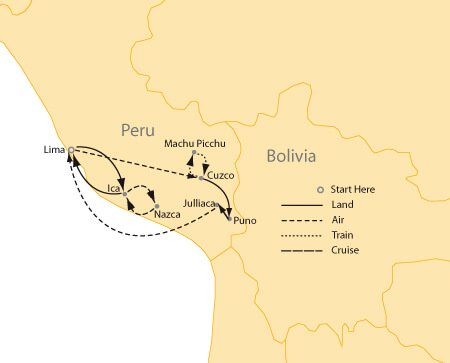