Tour Overview:
Brimming with both natural and manmade attractions, Peru is a place of great mystique, beauty and culture. Join this in-depth exploration of the Inca Empire culminating in your visit to awe-inspiring Machu Picchu where you’ll watch the sun rise over the mist covered mountains.

Arrive at Lima Airport. A transportation service and a representative will pick you up from the airport at the scheduled time to transfer you to your hotel in Lima. The Peruvian capital is a modern metropolis full of history, currently undergoing an exciting process of cultural and economic changes.

In the morning. Explore Lima’s old town, a UNESCO World Heritage Site, packed with fascinating historic buildings. Visit the Casa Aliaga, a colonial mansion granted by chief conquistador Francisco Pizarro to one of his captains, Jeronimo de Aliaga. This is the only house from that time, still belonging to the same family. See the Main Square, where you can appreciate the grandiose architecture of the Spanish Empire. Admire Lima’s Cathedral, built during the 16th century. Continue to the traditional Pueblo Libre district, where you visit the Larco Museum, located in a beautifully restored viceregal mansion built on a pre-Columbian pyramid from the seventh century. The museum boasts a complete pre-Hispanic collection of gold and silver objects, as well as pieces of erotic art. At the end of the tour, enjoy lunch at Café del Museo Larco. (BL)

At the agreed time, you will be transferred from the selected hotel to Lima airport. Once you arrive to the Imperial City, a guide will meet and greet you at Cusco Airport and then transfer you to the selected hotel in the Sacred Valley. En route vist Awanakancha, an exhibition center of textiles and South American camelids located at kilometer 23 of the road to Pisac. It is considered a living museum and here you can see Andean camelids, learn about the techniques to take their wool and finally acquire finely spun garments. You wil then visit the Pisac market, consisting of dozens of stalls displaying and selling goods crafted by residents of the area. You can find textiles, carvings, and replicas of ancient Inca pieces. Located 33 kilometers from the city of Cusco, it is a town built as a partridge, also known for hosting one of the most important archaeological sites in the Sacred Valley on the slopes of the hills. It is perhaps the largest complex of platforms in the area. (BL)

During the morning, you are picked up from your hotel to visit the town of Chinchero, a traditional Cusco urban centre located at an elevated point with a beautiful view of the valley. The inhabitants of this area preserve the artisan traditions and the inherited knowledge of the Incas and display them in their clothes and customs. In Chinchero there are also archaeological remains and a beautiful seventeenth-century church, one of the first Catholic buildings in Peru. Then, you are transferred to the Living Museum of Yucay, a centre Andean traditions interpretations, where demonstrations of the elaboration of textile work, adobe, pottery and silverware are carried out in the same way in which they used to in antiquity; an original recreation of Inca traditions. Also, residents of the museum include llamas, sheep and alpacas, and they can be fed! Upon arriving in Ollantaytambo visit its town, inhabited uninterruptedly since Inca times, and have a superior Andean gastronomy experience in a restaurant, where the true spirit of the Sacred Valley is transmitted in a cosy atmosphere! Later, climb the iconic fortress, built next to a mountain and then you are transferred back to your hotel. (BL)

A transportation service will pick you up and transfer you to the Ollanta Station to board the train to AguasCalientes, the nearest town to Machu Picchu. Following a scenic journey through dramatic Andean landscapes, arrive at the station in Aguas Calientes. Here you board a coach for a 25-minute ride to Machu Picchu. The ‘Lost City of the Incas’ is believed to have been built in the 1450s by Inca emperor Pachacuti as a holiday retreat, yet within a century the city would be abandoned following the Spanish conquest. The Spaniards never found it, so it was spared the destruction they brought on other Inca sites. Instead, it was slowly swallowed up by the jungle and hidden from harm. A guided tour explains the origins behind this awe-inspiring citadel, presenting its most prominent landmarks such as the monumental Main Square, the Royal Quarters, the Temple of the Three Windows, the Circular Towers, the Sacred Sun Dial, and the Burial Grounds. Enjoy buffet lunch at Sanctuary Lodge. (BLD)

The delicious breakfast at the hotel is followed by a relaxing morning at leisure.
Enjoy lunch at hotel. Later, in the afternoon, transfer to the Aguas Calientes station and take the train back to Ollanta station. From here you will be transferred to your hotel in Cusco. (BL)

In the afternoon, enjoy a guided tour of this charming city, which was the capital of the Inca Empire. The tour starts with a visit to Santo Domingo Convent, a large Renaissance-baroque complex, which was built over the Inca Coricancha temple. It was one of the most important temples dedicated to worshipping of the sun, and its foundations are still prominent at the base of the convent. Ancient chronicles say the temple was covered in gold leaf and filled with golden representations of nature. Then, visit the Cathedral, the most imposing monument of the Main Square. Head to the hills above Cusco to visit the remains of the fortress of Sacsayhuaman, whose imposing ramparts offer a stunning panoramic view of Cusco, and the ruins of the temple and amphitheatre of Qenqo, where it is believed the Incas practised agricultural rituals. Admire Qenqo and then finally visit PukaPukara (‘Red fortress’ in Quechua) an Inca military complex located on a prominent hill. Its dwellings squares, bathrooms, aqueducts, walls, and towers can still be appreciated. Afterwards, return to your hotel. At night, enjoy dinner show at local restaurant. (BD)

Morning at leisure.Lunch at Inka Grill restaurant.
A vehicle will transfer you from the selected hotel to the airport. A representative will assist you along the way. (BL) 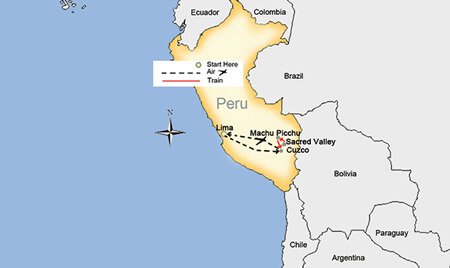