Tour Overview:
Covering Auckland, Rotorua, Hobbiton and Waitamo, this 5 day tour takes you to some of New Zealand’s best known attractions. After arriving in Auckland, depart for The Thermal City of Rotorua via Hamilton, New Zealand’s 4th largest city. Visit Te Puia Thermal Reserve and visit the world renowned Hobbiton Movie Set, before departing for the famous Waitomo Glowworm Caves, described by many as one of the most unique experiences in the world.

On arrival in Auckland, ‘The City of Sails’, you will be met and transferred to your hotel. The remainder of the day is at leisure.

Farewell the ‘City of Sails’ as you travel south to reach the market garden area of Pukekohe. Continue through Hamilton – New Zealand’s fourth largest city and the fertile Waikato region to the ‘Thermal City’ of Rotorua. This afternoon is at leisure. This evening enjoy an authentic Maori Hangi (feast) & Concert. (BD)


Visit Te Puia Thermal Reserve to see boiling mudpools and roaring geysers. Following this, visit Rainbow Springs to see New Zealand’s trout, birds and wildlife before continuing to the Agrodome for a New Zealand farm show. This afternoon, visit Hobbiton Movie Set for a 2 hour guided tour of ‘Middle Earth’. Return to Rotorua for the evening at leisure. (B)

Travel over the forested Mamaku Ranges to reach Waitomo. Enjoy a guided tour of the world famous Waitomo Glowworm Caves including an underground boat ride viewing the millions of glow worms on the cavern roof. On completion continue through the fertile Waikato area to reach Auckland. (B)

Transfer to the airport for your departing flight. (B)

* This tour is also available on self-drive basis 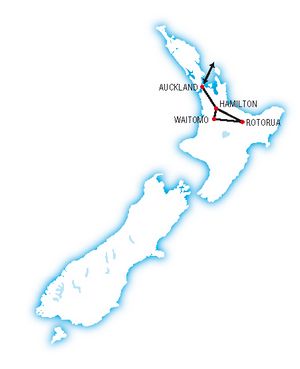