Two empires meet in this beautiful, mystical land. You’ll explore Lima, the colonial capital of South America and then soar to the heights of Machu Picchu aboard the luxury HIRAM BINGHAM TRAIN to explore the mysteries and magnificent vistas of this world wonder. Luxury accommodations include an oxygenated room at the Monasterio Hotel in Machu Picchu.

Depart North America today and arrive in Lima, Peru. You are welcomed and transferred to the hotel.

Lima has long been considered the colonial capital of South America. Founded in 1535, Lima was called the “City of Kings” by the Spanish conquistadors. Visit the Plaza de Armas, the Government Palace, the Cathedral, the Santo Domingo or San Francisco convents and the modern garden suburb districts of Miraflores and San Isidro. At the Larco Herrera Museum, see the ancient relics and shining treasures of the mighty Incas. (BL)

Fly to Cuzco, the oldest inhabited city in the Western Hemisphere. Travel to Pisac to see the ruins of an ancient citadel that once controlled a route that connected the Inca Empire with the Paucartambo River. The panoramas from Pisac are magnificent, offering views of the impressive patchwork effect in the countryside below, which was accomplished by patterned fields and rimmed by vast terracing cut out of solid rock. In the upper section lies the main Sun Temple and above the temple are still more unexcavated ruins and hidden burial sites. Continue to the Ollantaytambo archaeological complex, the Incas built it as a fort that included a temple, agricultural terraces, and an urban area. There are two distinct sectors: The religious and worship zone, and the residential area. Ollantaytambo was an important administrative center with probable military functions if one considers the walls and towers. There are also traces of ancient roads and aqueducts. The town of Ollantaytambo is called a “Living Inca Town” since the inhabitants maintain very old practices and customs. Later, visit the market for a taste of colorful local life. (BL)

Travel aboard the HIRAM BINGHAM TRAIN from Ollantaytambo to the archeological wonder of Machu Picchu, built in the late 14th century. Machu Picchu was obviously a wellplanned and carefully built city, made up of two clearly different sectors—one agricultural and the other urban. With mountains to one side and a river roaring far below, this solemn fortress is a fascinating remnant of a oncebustling city that was mysteriously abandoned after the middle of the 16th century. Secreted amidst dense jungle vegetation and steep hills, Machu Picchu remained undiscovered by the modern world until 1911. Learn about the many legends and strange truths of these ancient ruins from your local guide. (BLD)

As the sun rises over the mountains, watch the morning mist disappear once again to reveal this awe-inspiring city, probably the most amazing urban creation of the Inca Empire. Return to Cuzco aboard the “Inca Train.” Sip a cup of tea and enjoy panoramic views as the beautiful greenery of the Urubamba Valley rolls by. (BL)

Today, visit several ruins, including Kenko and Tambomachay. Journey to the Sacsayhuaman fortress in the “Valley of the Incas.” Later, see the hillside fort and Puca Pucara. Overnight at the hotel. (BL)

Morning at leisure. Check out enjoy some free time before a farewell lunch at a local restuarant. The remainder of your afternoon is free. Fly back to Lima and connect for your late-night departure. (BL) 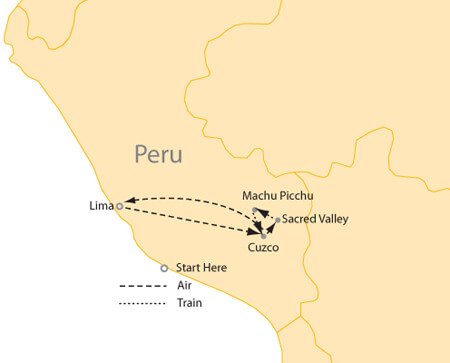 SITA Exclusive:
As a guest of SITA, you will receive a special SITA amenity in Lima, an oxygenated room at Monasterio Hotel and attend a horsemanship show at a privately owned Hacienda.